The S&P 500 just bounced off another all-time high today as stronger than expected earnings continue to boost the market. The S&P 500 has grown 17.5% since the beginning of the year, continuing its momentum from Q1 which was the biggest market rally in almost a decade and has officially gained back everything it lost in the Q4 correction and more. Below you can see the 52-week performance chart for the S&P 500. If this rally is going to continue it wouldn’t be a bad idea to take a look at S&P tracking ETFs like VOO or IVV.

So equities are at an all-time high, what does this mean for the rest of the market? Oil has been rallying with the equity market since the beginning of the year, a trend that is typically inverse to economic theory. This rally has been driven by OPEC’s production cuts, Iran oil sanctions and turmoil in Venezuela. The Iran oil sanction exemptions for eight countries ends today ostensibly pulling 1.5 million BPD off the market. This will effect international oil supply and could push oil prices even further. Venezuela has more oil underneath it than any other country on Earth but mismanagement and political unrest has caused oil production to plummet in recent months. Production is down to less than 1 million barrels per day (BPD) from its high of 3.5 million BPD in the late 90s and 3 million BPD in 2014. Oil prices have leveled out in the last few weeks with crude futures currently trading at $62.90 per barrel down 4% this week. Oil investors are weighing US production growth and OPEC’s agreement to cut 1.2 million BPD from January to June. US oil production is at an all-time high of 12.27 million BPD and expected to grow to over 13 million BPD in the next year. OPEC’s target oil price is likely in the range of $60 to $70 a barrel and will be reassessing their production cuts in their June meeting. 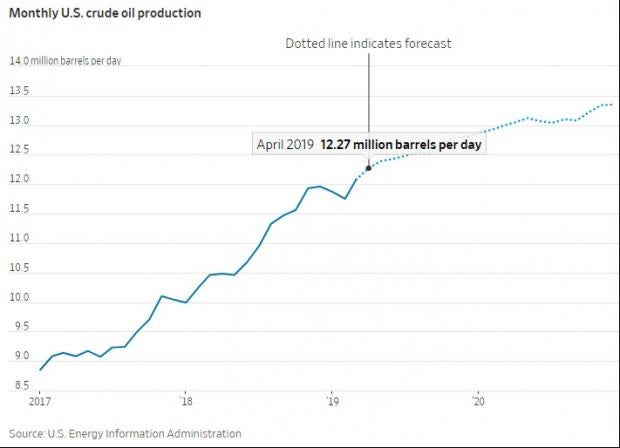 Some Oil Stocks to Consider:

The Federal Reserve kept interest rates untouched as their two day meeting came to an end today. What investors were looking for in the press release today is what it will take for the Fed to make material changes in their portfolio size and any hints to about future Fed Fund rate changes. Nothing notable changed in the Feds outlook though leaving markets essentially unchanged. GDP was stronger than expected this quarter coming in at 3.2% annualized, but inflation dropped to 1.6% for March below the Fed 2% target. The Fed’s patient approach will likely continue until inflation or unemployment become an issue. The US 10 yr treasury notes have stayed in the 2.4-2.6% range for the last 1.5 months or so and expected to remain around 2.5% until a market catalyst changes this.

US Dollar and Gold

The US dollar has been getting stronger over the last 52-weeks, with dollar index DXY being up over 5%. This is being caused by economic trouble overseas as well as lower than expected inflation rates. This rising dollar is good for imports because it makes products abroad relatively less expensive domestically but bad for exports because it makes our domestic goods relatively more expensive to consumers abroad.

This has an effect on gold prices for a number of reasons. One, gold is bought primarily in US dollars so when the value of the dollar increase so does the relative price of gold making a less attractive investment for foreign investors. Also, the dollar index is a measure of inflation relative to international inflation, as our inflation levels lag behind other countries the value of our currency increases. Since Gold is an inflation-protected commodity the price rises as inflation does and vice versa, making it inversely correlated with DXY. Gold is also a “flight to quality” commodity meaning that when the equity market sells off, investors will flock to investments like gold or fixed income depending on inflation rate and interest rates. As interest rates come closer to inflation rates, gold becomes a much more attractive investment.

All of this being said Gold is down 6.5% since its high in mid-February because of all the factors I mentioned above: a strong dollar, low inflation, and strong equity returns. This could all flip very quickly as economies abroad begin to pick up steam and domestic pricing pressures increase, as well as the equity slowdown some investors think is imminent.

AngloGold Ashanti (AU) could make an excellent hedge for your equity-heavy portfolio with a beta of -1. This stock is down for the year but is showing 30.4% gains over the past 52-weeks. Analysts are increasing their EPS estimates for this stock making it a Zacks Rank #2 (Buy).

Kirkland Lake (KL) is performing even better with over 80% returns over the past 52-weeks. This stock also boasts a negative beta making a solid hedge for any equity portfolio. Kirkland has been growing quickly, more than doubling its annual revenue in just 2 years and consistently showing positive growth as well as expanding margins.

Consumer sentiment is up and equity markets are stronger than ever as the US economy continues to supporting this. Oil prices are leveling out after rallying over 30% so far this year. The Fed keeps rates unchanged with inflation below target and stronger than expected GDP figures. This has all boosted our dollar which has in turn decreased gold prices. This could all change at any moment as investors are becoming more and more cautious of a potential down turn having seen two recessions in less than 20 years. Buying oil stocks on the pretense of a continued rally could be beneficial for your portfolio, especially when these stocks are rewarding investors with upwards of 6% dividends. Buying gold miner stocks would make a great hedge for any high beta portfolio.