Sometimes you just get too much of a good thing!

Take the Zacks Rank, for example. You know it’s one of the most successful stock rating systems out there, but at any given time there are hundreds of stocks with a Zacks Rank #1 (Strong Buy) or Zacks Rank #2 (Buy).

You can’t buy them all!

That’s where the Zacks Style Scores come in. These indicators help to fine tune that long list of stocks to increase your odds of outperformance, and they’re split into Value, Growth and Momentum scores depending on what kind of investor you are.

But if you want everything in one place, then there’s the VGM, which combines all three styles into one score.

It’s also the focus of the Top VGM Buys screen.

In addition to the Zacks Rank and VGM, the screen also looks for stocks in the top 50% of the Zacks Industry Rank as well as several other criteria. You can check out those parameters here.

Below are three names that passed this rigorous test.

We’re getting close to “the most wonderful time of the year”!

Yeah, yeah, Christmas is great and all, but we’re talking about the entire holiday shopping season. As soon as Halloween is over, it will pick up with the kind of gusto that will make you sick of carols and peace on earth by Thanksgiving.

And Target (TGT) plans on being one of the main reasons why you’ll be puking up comfort and joy long before Santa arrives.

This discount giant is proving that brick-and-mortar retailers aren’t as dead as many claim. It has been bulking up its online presence, enhancing its omni-channel capacities and expanding its same-day delivery options.

And now it plans to take a big piece of holiday spending this year, which the International Council of Shopping Centers thinks will growth nearly 5% from last year to over $830 billion.

Target is even bringing Toys R Us back! Through a deal with Tru Kids Brands, the company will be supporting a ToysRUs.com website.

In its fiscal second quarter from August 21, TGT reported earnings per share of $1.82 that beat the Zacks Consensus Estimate by more than 13%. It also improved nearly 24% from last year’s $1.47.

Revenue of $18.42 billion inched past our expectations and improved 3.6% from last year. Same-store sales were up 3.4%. The company enjoyed healthy traffic and improved digital sales.

TGT also raised its outlook for fiscal 2019 earnings, which convinced analysts to boost their expectations.

At the moment, we expect earnings growth of nearly 6% for next year.

The stock has jumped more than 71% this year, which trounces its industry performance of nearly 40%. By the way, retail – discount stores is in the top 4% of the Zacks Industry Rank. 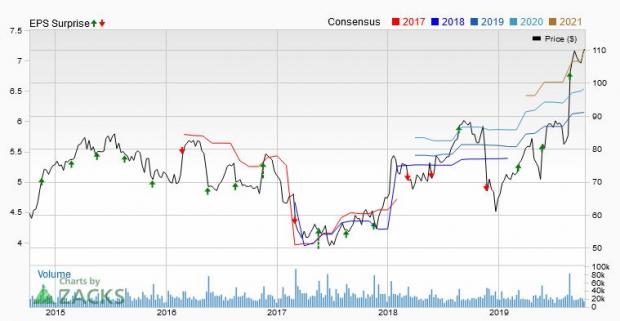 Move over heart… because home is also where the money is.

Declining mortgage rates and strong employment have helped the building products – homebuilders space reach the top 7% of the Zacks Industry Rank with a year-to-date surge of more than 50%.

One of the big players in the space is KB Home (KBH), a Zacks Rank #1 (Strong Buy) that has beaten its highly-ranked industry by soaring approximately 80% this year.

Most recently, the company beat the Zacks Consensus Estimate for the 15th straight quarter. Fiscal third-quarter earnings per share of 73 cents beat expectations of 65 cents by 12.3%.

The four-quarter average beat is now north of 15%.

Revenues of $1.16 billion missed expectations, but net orders rose by 24% with double-digit increases in each of its four regions.

KBH is in its third year of a Returns-Focused Growth Plan, which seems to be paying off. It has increased its scale and profitability, while generating significant operating cash flow that it uses to reinvest and pay down debt.

While earnings and revenue in the recent quarter were each down from a year ago, KBH plans to save the best for last with a strong final quarter of 2019. And the company has a $2.3 billion backlog to help make it happen.

Plus, declining mortgage rates, steady economic growth and favorable demographics will continue to provide a healthy backdrop for the entire housing industry.

Analysts are pretty encouraged too. The Zacks Consensus Estimate for this year (ending next month) is at $2.82 per share, which has advanced 5.2% over the past 30 days.

Expectations for next fiscal year (ending November 2020) are rising even faster. Analysts have raised their estimates 8.7% in the past month to $3.36. Most impressively though, earnings for next year are expected to soar more than 19% from this year.

Investors don’t usually get excited about the insurance – property & casualty space, but they can certainly respect that it has gained more than 5% year to date. That’s enough to put it in the top 13% of the Zacks Industry Rank.

But you know what is exciting? Arch Capital (ACGL) has soared approximately 55% over the same time period! It has left its industry in the dust. In other words, this company is like your cool uncle that shows up at otherwise boring family functions with long hair and a custom chopper… that’s fully insured of course.

ACGL continued its impressive streak of positive surprises in its second quarter. Earnings per share of 77 cents topped the Zacks Consensus Estimate of 69 cents by nearly 12%.

It has now beaten our expectations for 7 straight quarters, but that’s only part of the story. Except for a rare miss in late 2017, ACGL has been topping expectations going back years.

It now has a four-quarter average beat of more than 14%.

ACGL also has a good record on beating our topline expectations. It reported revenues of $1.62 billion in the second quarter, which beat the Zacks Consensus Estimate by nearly 5%.

The company continued its amazing track record of premium growth with gross premiums written advancing by 14.2% to $1.9 billion, due to its insurance, reinsurance and mortgage segments.

The quarter also benefited from improving net investment income and a decline in expenses. 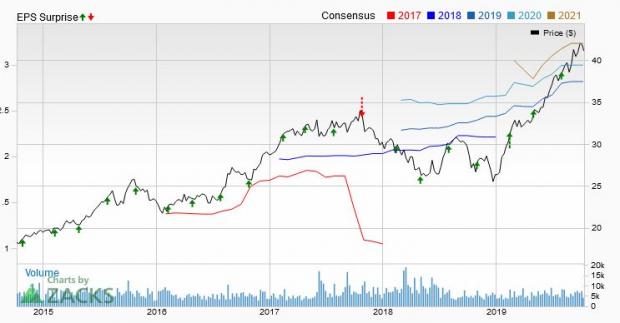 Looking for Stocks with Skyrocketing Upside?

Zacks has just released a Special Report on the booming investment opportunities of legal marijuana.

Ignited by new referendums and legislation, this industry is expected to blast from an already robust $6.7 billion to $20.2 billion in 2021. Early investors stand to make a killing, but you have to be ready to act and know just where to look.